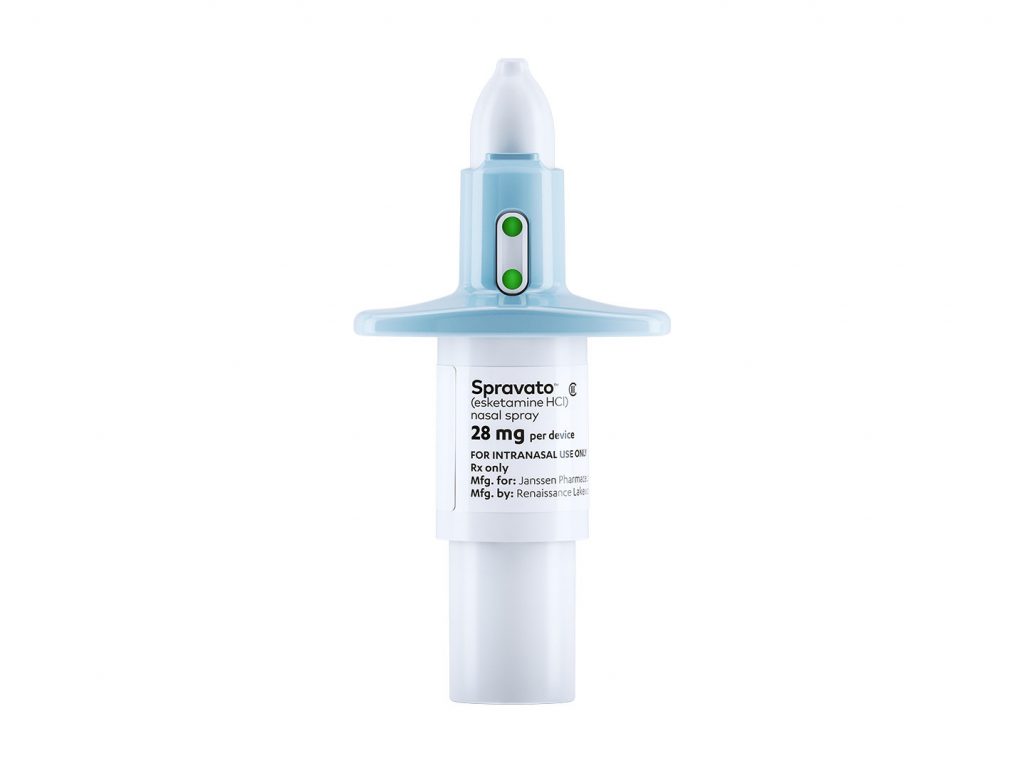 While some experts have hailed intranasal esketamine (Spravato, Janssen) as a "game changer" for treatment-resistant depression (TRD), others are concerned over the US Food and Drug Administration's (FDA) rapid approval of the drug.

In an editorial published online October 31 in Lancet Psychiatry, Erick H. Turner, MD, who sits on one of the FDA advisory committees that recommended approval of Spravato, said the drug did not meet standard criteria for FDA approval and that there was little evidence to support its safety and efficacy based on data from three short-term, phase 3 trials and one withdrawal trial.

Turner, who is a psychiatrist at Oregon Health and Science University in Portland, noted that only one of the three trials that led to the drug's approval was positive.

"Accepting just one short-term trial as being enough is an historic break from precedent," Turner told Medscape Medical News.

On February 12, at the conclusion of a joint meeting of the FDA's Psychopharmacologic Drugs Advisory Committee and the Drug Safety and Risk Management Advisory Committee, esketamine was endorsed and the FDA approval quickly followed on March 5.

In his Lancet Psychiatry article, Turner outlined his concerns. He notes, among other issues, that the trials that served as the basis for the drug's approval defined TRD as a failure of any two antidepressants, a definition that is "arguably lax."

"Based on the evidence provided in Janssen's application, the FDA should not have approved the drug," Spielmans, who researches antidepressant medications, told Medscape Medical News.

The fact that esketamine was superior to placebo to a statistically significant extent in only one of the short-term trials "is unimpressive," said Spielmans. The FDA "lowered the bar" for approving esketamine, he added. "I don't support the idea of approving a treatment with subpar efficacy because other medications for treatment-resistant depression don't work very well and esketamine has a different mechanism of action," he said.

Turner noted that there was a widespread assumption that a "breakthrough" drug with a novel mechanism of action is more effective than approved alternatives — a phenomenon he calls "breakthrough bias."

"If you showed them the same data for an SSRI, they would ask, 'What's good about this?' "

Esketamine, a glutamatergic N-methyl-D-aspartate (NMDA) receptor antagonist, is an S-enantiomer of ketamine racemate. Both esketamine and ketamine appear to increase neurotrophic signaling that affects synaptic function. Ketamine is approved in the US for inducing and maintaining anesthesia via intravenous (IV) infusion or intramuscular (IM) injection. It is not indicated for major depressive disorder (MDD), including TRD, though it is frequently used off-label for this indication.

In fact, as previously reported by Medscape Medical News, there is a rapid proliferation across the US of ketamine infusion clinics to treat depression that operate with little or no regulation.

In its briefing document submitted to the FDA, Janssen provided information on several studies, including three double-blind, controlled, short-term (28-day) phase 3 studies that evaluated the efficacy and safety of esketamine given concurrently with a newly initiated oral antidepressant.
One of these studies was conducted exclusively in patients age 65 years or older, and two were in adults under age 65; one was a fixed dose study, the other a flexible dose trial. Another trial was a double-blind randomized withdrawal study.

In patients with TRD, evidence showed that esketamine nasal spray combined with a newly initiated oral antidepressant "provided statistically significant, clinically meaningful, rapid and sustained improvement of depressive symptoms in this difficult-to-treat population," the company said in a news release.

Janssen emphasized the "substantial need" to develop innovative treatments for this older population. However, in defending the FDA's rapid approval of esketamine, Gerard Sanacora, MD, PhD, professor of psychiatry and director of the Yale Depression Research Program in New Haven, Connecticut, noted that it is very difficult to find patients in the community who meet the full — and strict — criteria for treatment failure required for these studies.

Participants in the studies assessed by the FDA advisory committees for esketamine's potential approval were not required to have failed psychotherapy — another concern for Turner because it doesn't reflect the "real world" of patients with TRD. Turner also noted that the single trial involving older patients was nonsignificant, so the drug's efficacy in this "important demographic" has not been established.

Both Turner and Spielmans took issue with the company's randomized withdrawal trial. Although this study was positive, "it does not compensate, in my opinion, for the lack of a second positive short-term trial," said Turner.

He explained that this trial included only patients originally assigned to esketamine in a short-term trial and who had achieved stable remission, so esketamine nonresponders were essentially "weeded out." This, said Turner, resulted in an enriched population that was statistically more likely to respond to the drug.

"You're testing whether the drug works within a subset of known esketamine responders," said Turner. "That's a way of stacking the deck. It's like conducting a poll on the popularity of our fine president within a sample of people who you know already voted for him in 2016."

In this study, there was a faster relapse in those on placebo than on esketamine (within 2-4 weeks compared with the typical 1 month or more). Spielmans questioned this quick return of depression among patients switched to placebo. "Depression should not naturally return so rapidly after discontinuing successful treatment," he said.

Esketamine "is not subtle", added Spielmans. "It has characteristic properties. For example, it causes high rates of sedation and dissociation. People are going to notice if they stop taking it, which erases the 'blindness' of the study."

Allowing a withdrawal study to count for evidence of esketamine's efficacy "is ridiculous," said Spielmans. The placebo group at one site in the withdrawal trial had a 100% relapse rate, which drove the overall result, said Turner. He noted that by removing this outlier, the results change from significant to nonsignificant.

Spielmans had similar concerns. "If one outlier study site, especially one outside of the USA, is driving the results, that raises questions about the stability of the overall findings," he said.

However, Sanacora noted that the FDA found no reason to exclude data from this site.
"If we were to start excluding outliers from the analyses, we should make sure we are doing this in both directions. Selectively dropping the data from this study is a form of reverse cherry-picking," said Sanacora.

A sensitivity analysis "done with the complete patient-level data to see how the study outcome is truly altered by this site," would be "very interesting," he added.  Yet another concern for Turner was that in one of the esketamine studies, only about 10% of patients who received the drug achieved a rapid clinical response. In another, the response for esketamine was even lower (8%) and, compared with placebo response (5%), was nonsignificant, he said.

Sanacora acknowledged that the rates of response do appear to be lower than those reported in other studies at very early time points. However, he said, certain factors related to these "unique phase 3 studies" of esketamine may have contributed to this.

"These participants were all simultaneously undergoing changes in their concomitant antidepressant medication regimens. They were all also made aware that this was an ongoing study with frequent dosing schedules that dramatically influence expectations," Sanacora said.

He noted how "very difficult" it is to attempt head-to-head comparisons of speed of onset in different studies due to methodological differences. "We should also keep in mind that the phase 3 studies in the subjects aged 18 to 65 did show a fairly consistent drop of approximately 8 MADRS [Montgomery-Åsberg Depression Rating Scale] points by day 2. That is not far from the total change from baseline after several weeks of treatment for several other approved antidepressant treatments," Sanacora said.

Nevertheless, esketamine doesn't appear to be any more effective than its less expensive alternatives. A meta-analysis using the primary outcome results of the three esketamine trials "yields a standardized mean difference of 0.28 (95% confidence interval, 0.11 - 0.44)," writes Turner.

Accessing the drug is somewhat complicated. For outpatients, it requires going to a doctor who has been "certified" to have the appropriate setting, said Turner. It also means staying for 2 hours after administration for monitoring. The drug is not dispensed directly to patients.

According to the FDA's risk evaluation and mitigation strategies (REMS), patients prescribed esketamine are required to enroll in a registry to better characterize the associated risks of the drug.

At this point, "there is no good evidence that esketamine outperforms alternatives," said Spielmans, who was lead author of a systematic review of relevant trials of atypical antipsychotics, which are widely used for TRD.

"I am not a big fan" of the widespread use of atypical antipsychotics in depression, "but I don't see evidence that esketamine is a better alternative," said Spielmans.
Psychotherapy, which is safer than either antipsychotics or esketamine, should be considered as a viable treatment option, he said.

In light of the concerns he outlined in the Lancet Psychiatry article, "clinicians and patients might wish to temper their expectations" of esketamine nasal spray, Turner writes. In contrast, Sanacora believes esketamine presents "a truly unique option" for TRD. He added that it's "critical to examine the totality of the data available in formulating any decisions regarding the treatment risks and expected benefits."
Sanacora believes this is what the FDA's advisory committees did in arriving at the decision to approve esketamine.

However, considering the relatively limited use of this new drug in community samples so far, Sanacora acknowledged that "there is still a real need for additional high-quality data to be collected and analyzed in an unbiased fashion to help further guide the use of this medication."

Research contracts: AstraZeneca, Bristol-Myers Squibb, Eli Lilly & Co, Johnson & Johnson (Janssen), Hoffmann La-Roche, Merck & Co, Naurex, Servier, and Usona Institute over the last 5 years. Free medication was provided to Sanacora for an NIH sponsored study by Sanofi-Aventis.
Sanacora holds equity in BioHaven Pharmaceuticals and is a co-inventor on a US patent held by Yale University, and is a co-inventor on a US Provisional Patent Application filed by the Yale University Office of Cooperative Research and others Combination Therapy for Treating or Preventing Depression or Other Mood Diseases.

Yale University, Sanacora's employer, has a financial relationship with Janssen Pharmaceuticals and may in the future receive financial benefits from this relationship. The University has put multiple measures in place to mitigate this institutional conflict of interest.