NIMH Reports: Side Effects from Ketamine Infusion are Mild and Brief - 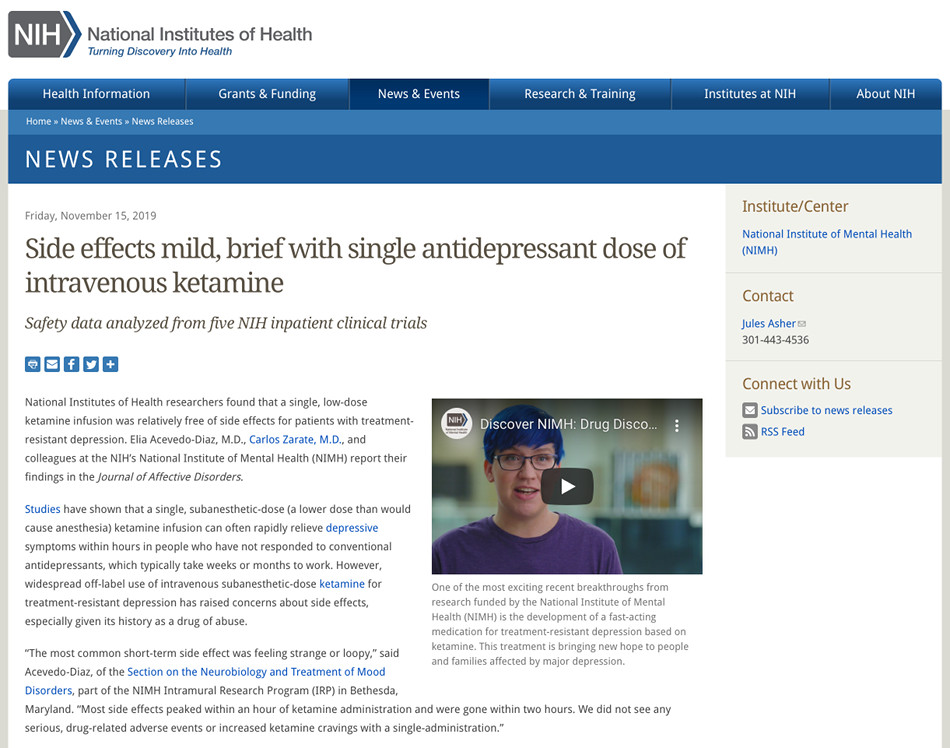 One of the most exciting recent breakthroughs from research funded by the National Institute of Mental Health (NIMH) is the development of a fast-acting medication for treatment-resistant depression based on ketamine. This treatment is bringing new hope to people and families affected by major depression.

National Institutes of Health researchers found that a single, low-dose ketamine infusion was relatively free of side effects for patients with treatment-resistant depression. Elia Acevedo-Diaz, M.D., Carlos Zarate, M.D., and colleagues at the NIH’s National Institute of Mental Health (NIMH) report their findings in the Journal of Affective Disorders.

Studies have shown that a single, subanesthetic-dose (a lower dose than would cause anesthesia) ketamine infusion can often rapidly relieve depressive symptoms within hours in people who have not responded to conventional antidepressants, which typically take weeks or months to work. However, widespread off-label use of intravenous subanesthetic-dose ketamine for treatment-resistant depression has raised concerns about side effects, especially given its history as a drug of abuse.

“The most common short-term side effect was feeling strange or loopy,” said Acevedo-Diaz, of the Section on the Neurobiology and Treatment of Mood Disorders, part of the NIMH Intramural Research Program (IRP) in Bethesda, Maryland. “Most side effects peaked within an hour of ketamine administration and were gone within two hours. We did not see any serious, drug-related adverse events or increased ketamine cravings with a single-administration.”

The researchers compiled data on side effects from 163 patients with major depressive disorder or bipolar disorder and 25 healthy controls who participated in one of five placebo-controlled clinical trials conducted at the NIH Clinical Center over 13 years. While past studies have been based mostly on passive monitoring, the NIMH IRP assessment involved active and structured surveillance of emerging side effects in an inpatient setting and used both a standard rating scale and clinician interviews. In addition to dissociative (disconnected, unreal) symptoms, the NIMH IRP assessment examined other potential side effects — including headaches, dizziness, and sleepiness. The study did not address the side effects associated with repeated infusions or long-term use.

Out of 120 possible side effects evaluated, 34 were found to be significantly associated with the treatment. Eight occurred in at least half of the participants: feeling strange, weird, or bizarre; feeling spacey; feeling woozy/loopy; dissociation; floating; visual distortions; difficulty speaking; and numbness. None persisted for more than four hours. No drug-related serious adverse events, cravings, propensity for recreational use, or significant cognitive or memory deficits were seen during a three-month follow-up.

To overcome the limitations associated with side effects and intravenous delivery, ongoing research efforts seek to develop a more practical rapid-acting antidepressant that works in the brain similarly to ketamine. These NIMH researchers, in collaboration with the National Institute on Aging, and the National Center for Advancing Translational Science, are planning a clinical trial of a ketamine metabolite that showed promise as a potentially more specific-acting treatment in pre-clinical studies. Meanwhile, the U.S. Food and Drug Administration earlier this year approved an intranasal form of ketamine called esketamine, which can be administered to adults with treatment-resistant depression in a certified doctor’s office or clinic.

About the National Institute of Mental Health (NIMH): The mission of the NIMH is to transform the understanding and treatment of mental illnesses through basic and clinical research, paving the way for prevention, recovery and cure. For more information, visit the NIMH website.

About the National Institutes of Health (NIH): NIH, the nation's medical research agency, includes 27 Institutes and Centers and is a component of the U.S. Department of Health and Human Services. NIH is the primary federal agency conducting and supporting basic, clinical, and translational medical research, and is investigating the causes, treatments, and cures for both common and rare diseases. For more information about NIH and its programs, visit www.nih.gov.